Wolfsinger are an heavy metal band, born from an idea of Haron Wolf and Raffaella singer in 2012, to write their original songs, inspired by the classic heavy metal sound .
In 2014 the drummer Gillo and the guitarist Davide Mantovan joined the band to complete the current line-up.
After a very busy live activity, the band released the first demo “ jump on the head “ in 2014, written in collaboration with the german author “ Stephan George “ and the guitarist Rudy Graf, ex Warlock and Rage.
The composition of new songs and the live activity continue without interruption and in 2016, during the month of May, the band released the first self- produced full length “ Living with the inner beast “.
The album is mainly ispired to thematics regarding the man and his primordial animal instincs.
The music of Wolfsinger have a very genuine old school imprinting and their songs are strongly raccomended for...headbanging!.
The band is also founder of the "Metal Queen's Burning Nights" 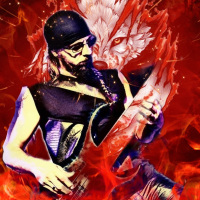 The I Don't Know